“HAIR!  HAIR!”   That’s what I heard coming from the bathroom the other morning.  “HAIR!”  Patty had just gotten out of the shower and was drying off when she discovered the newest crop of hair on her legs!  (Unfortunately, not too much sprouting on her head.)  I do have to say this new crop looked pretty good!  Patty hasn’t had to shave her legs ever since the beginning of chemo back in early September but the way this new hair is coming in, she’ll need to pull the ol Gillette Venus triple edge razor out from retirement in no time at all.  She also has a whole gaggle of eyelashes coming in!

Today marks seven weeks since her final chemo.  I’m watching  my wife get back to her old self.  Her taster is nearly 100%… I said “nearly” because there’s still a few things that have that, as she’d describe, “wallpaper taste and consistency.”  She’s so funny to watch when it comes to food.  Patty really appreciates food and how good things taste!  I guess I’d feel the same if food went from wonderful to crap overnight!  I’ve never seen anyone consume so much food and not gain a pound!  She’s requesting food that I haven’t prepared in years!  She’ll say in such a sweet voice… “Ed… can  you make pasta carbonara tonight for dinner?”  Or “Sweetie… I’m really in the mood for Orange Chicken!”  What?  So, those of you who know me know that I know my way around the kitchen.  It’s a good thing.  I’m reconnecting with my culinary skills that I lost for the past six months.  It’s kind of fun.  Then we (more like she) ALWAYS has to have some kind of dessert.  Her taster is telling her to have sweets like Ben and Jerry’s Vanilla Heath Bar Crunch or Peanut Butter Cup!  We were at the store earlier and we finished picking up daily necessities… she looked at me and said with so much enthusiasm:  “We need cookies for dessert!!!”  So, there they were, the White Chocolate Chip Macadamia Nut cookies!  The soft kind that you can’t pass up!  And now it’s close to Girl Scout Cookie time… I can only imagine how many boxes she’ll be buying!!! She’s killing me!  She doesn’t gain a pound and me on the other hand… lets put it this way, I got dressed for work yesterday morning and discovered my pants were a little “snug!”  I’m suffering from post chemo side effects!!!  That’s not good.  So if you haven’t seen me in a while and notice I may be getting a little wider in the middle… be nice!  It’s her fault! 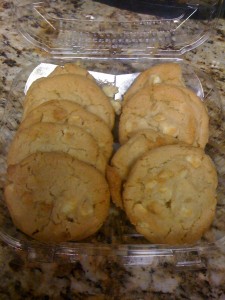 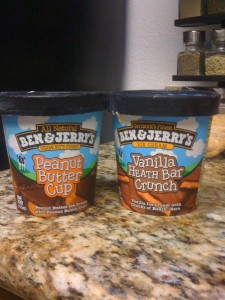 I really think the best thing for Patty right now is taking care of Avery during the day.  Her day is filled up with this little bundle of joy.  She keeps Patty busy, but doesn’t tie her down.  Those two have turned into a team.  Patty still does her running around, to the store or Jazzercise, and Avery is right with her.  Avery also keeps Patty’s mind busy on good things.

So, like I said earlier, today is officially 7 weeks since her last chemo.  I watch her get stronger everyday.  She’s still not 100% and we’ve realized that it’s going to take quite a while to get there.  I do notice that she’s losing the “chemo” look.  That’s the look where she just looked ill.  She’s getting her color back and is beginning to look like my “pre-cancer” wife.

Life is getting better day by day, other than my pants feeling a little snug!